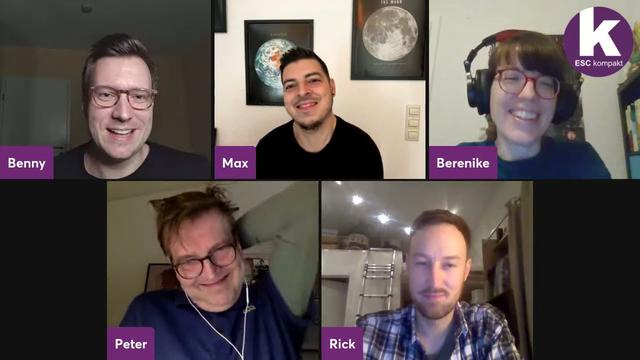 Tonight, in the grand finale of "The X Factor Israel", it will be decided who will represent Siegerland 2018 at the upcoming Eurovision Song Contest 2022 in Turin. There are still four candidates to choose from, each with a potential ESC contribution that was selected in a kind of semi-final two days ago.

These are the names of the finalists and the titles of their possible ESC contributions:

If the ESC compact readers have their way, Michael Ben David should not be able to take victory today, he is clearly in the lead with his "IM" in our survey. However, you can continue to vote until the start of the show.

What contribution should Israel make to ESC 2022?

In the final tonight, in round 1, each of the singers will first present a cover song, after which the first candidate has to go. In the end, we only get to see the performance of the respective potential ESC contribution (in round 2 of the final) from the three most popular acts. The act for the ESC 2022 in Turin will then be determined by 50% of the votes from the spectators and 25% from the jury and a “professional committee” each. This year, the "X Factor Israel" jury consists of ESC winner Netta, Aviv Geffen, Margol, Miri Mesika and Ran Danker.

We have already reported in detail elsewhere about the long and winding paths of the talent show "X Factor Israel", which this year serves as a preliminary decision for the upcoming ESC (read here and here).

According to the current program schedule, tonight's show starts at 8:15 p.m. Central European Time, is scheduled to last until 9:30 p.m. and will probably - and hopefully not be geo-blocked - be seen here in the live stream of Reshet 13 (alternative stream here). We keep you up to date on all important events here in the live blog and you can comment on what happened before, during and after the broadcast under this post.

Hello and welcome to this Israel finals live blog. Incidentally, the information about the start time varies between 8:15 p.m. and 8:30 p.m., so it is quite possible that we will have to wait a few more minutes until it finally starts. Let us surprise!

I hope that despite the tough competition tonight, some of you will find your way to this live blog. Even if casting show finals are not necessarily that attractive. But it will certainly be good tonight anyway!

Of course, we as the Frankfurt jury are again awarding up to 10 points per person and contribution. I'll be backed by Rafael again, so 20 points is our maximum. You are welcome to give your ratings in the comments as well.

Big plus: So far the stream is going great, hopefully it will stay that way after 8:30 p.m....

So now the news is over and at least we're about to see the trailer for the show. Oh, but first the weather...

And now the stream is gone. Great. I can't get it to work either, but it works with ESCplus.

The show is on and the finalists look back on (not only) Israeli ESC history and reinterpret the winning songs. Even the intro seems as if everything was designed for a victory by Michael Ben David. He comes at the very end, is allowed to interpret "Toy" in a slow version, and Netta's emotional reaction is shown.

Oh, Hebrew is just a great language. Even if I always find it a pity that I don't understand anything.

Now the voting system is explained in more detail. As written above, only two acts make it into the second round. Two duels are held for this purpose. The two winners of the cover version round are automatically in the second round, the two losers have to fight for the last place in another duel.

Inbal Bibi - The Winner Takes It All

The ABBA-phoria also has Israel firmly in its grip. Inbal has a cellist on stage and sings the first verse and the first chorus very slowly, after that she accelerates a little. At the end there are many long and high notes with a lot of pyro. It's a typical casting show version to show your own skills, feeling is rather secondary.

Michael sings a song in Hebrew that I unfortunately don't know. He's wearing a neon yellow suit. The song starts out as a calm and soulful ballad, but then dancers join in and things really get going. Not always sung perfectly, but Michael showed his ability.

Now the jury can vote, but I don't quite understand the system yet. It seems as if the jurors now have to decide which of the two candidates they will give their five points to. There are even tough discussions in the jury and somehow it's about Austria and Switzerland.

The studio judges voted for Michael, as did the professional committee. How did viewers decide? Relatively even with slight advantages for Michael, but overall he's way ahead of Inbal. Michael has secured first place in the finals.

So let's get to the duel between Sapir Saban and Eli Huli. But first, advertising. And that for quite a long time. But now there is a countdown: it will continue in a minute.

And we're back. It continues with…

Sapir also sings a Hebrew song I don't know. She wears a black dress and stands among roses. This time there are also four strings on stage. Sapir sings the ballad with a lot of feeling and energy, she also shows her voice, but not everyone is in tune.

Eli Huli - I'll Be There For You

Eli sings the title song from "Friends" and that's the first time we hear a bit more rock tones on this show. Of course, that goes very well with his voice. The stage design is also a bit American (Sarah McTernan says hello!) and Eli wears a black hat. He looks very "indie" and brings a new touch to the finale.

It's already time for the voting. Both the jury and the professional committee see Eli ahead. The spectators also agree and Eli Huli is also in the second round.

It is now decided between the two women who can also move into the second round. But now the second commercial block.

Hm, I'm a bit lost. Are the two women already singing their ESC songs as "Stechen"?

Sapir Saban - Breaking My Own Walls

Sapir looks gorgeous with a strapless black dress, gloves and a little (lots of glitter). I like the verses and especially the bridge, but the chorus isn't the strongest. Nevertheless: Sapir sings the song very convincingly. It's getting a bit boring though...

At the beginning, Inbal is literally hanging on the ropes and is wearing a kind of gymnastics outfit, a black body that is partially transparent. The relationship between verses and chorus is definitely right here, the latter is a clear increase. In the second verse, Inbal raps more than she sings, the entire performance seems very ESC-suitable. In addition, Inbal sings great.

In this duel, Frankfurt clearly votes for Inbal. Let's see if that's the case - at least for now (again) advertising.

Phew, two and a half minutes left. It's really a LOT of advertising, it's like "The Masked Singer" here.

Go on! We come to the voting. The jury sees Inbal very clearly ahead. However, the Professional Committee sees slight advantages for Sapir.

Because there wasn't enough advertising just yet, there is now advertising again before the audience votes.

Inbal is also clearly ahead of the audience and can now continue to hope for the ticket to Turin.

Now we also hear the ESC songs of the two men.

"IM" sounds like Michael Bublé in the intro, then somehow like Netta meets Chanel. It's a song that could work at ESC, but probably not beyond that. In between, the common thread is also missing. A bit more melody and a chorus would have been good. Should be at the forefront, the show is already very mature.

With his outstanding voice, Eli would actually have the potential to sing a really good (rocking?) song. Instead, he's stuck with this song that doesn't seem to fit him at all. The dance choreo doesn't fit either. I think it will probably be decided between Michael and Inbal.

Looks like Inbal won't be allowed to sing her song again, instead going straight to the final vote. Before that, of course, there is a fast run.

Now there is no advertising, but a look back at the current "X Factor" season and the best moments of the jury. After that, the jurors are allowed to go on stage again themselves.

The show was supposed to be over in two minutes...

Now it's getting serious, the voting begins. Each judge can award 12, 10 and 8 points.

The first 12 go to Michael.

I missed the third.

The fourth 12 goes to Michael.

Okay, my prediction turns out to be completely wrong. Eli is also ahead on the Professional Committee and is now leading by more than twenty points. But we remember: the audience has 50% of the power. Everything is still in there.

It decides between Michael and Eli...

Unbelievable, Michael clearly wins the public vote and wins in the end with a one (!) point advantage.

Thank you very much for this evening and here you can now vote in our ESC barometer how you like "IM".